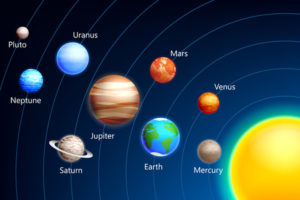 Holst, The Planets – astrological and astronomical

I have been wishing for the opportunity to conduct The Planets by Gustav Holst ever since a friend suggested I listen to it. We had just seen Star Wars (1977) and I was raving about the music saying that no one had ever written anything like that before. Naïve Marlene learned pretty quickly that I was totally wrong!

Mars, the Bringer of War

During the time of writing, Holst was interested in astrology. He was also living in a world about to unleash the horror of WWI.  Mars is the Roman god of war, whose red color symbolizes blood.   Holst wrote “hackles-raised” music using an unrelenting, brutally rhythmic motive in 5/4 time which the string players execute with the wood of their bows. The sound of wood on strings conjures an image of an approaching army bearing spears and shields.

Venus, the Bringer of Peace

The contrast between Mars and Venus is striking. The goddess of love and beauty is depicted right off the bat with a gorgeous horn solo. Throughout the work there are lovely solos for violin, cello and oboe. This is sensual, loving music with a backdrop of celestial, heavenly sounds from celeste, glockenspiel and harps. The music is not simple, far from it.  How interesting that Holst wrote music of great complexity to describe peace.

Fast, light, short. We wouldn’t expect any less from a winged messenger! Aside from the speed of the piece, a further challenge resides in the fact that there are two different keys (Bb and E) and two different rhythms right on top of each other throughout most of the piece. Holst loved this technique and did it often in his works. One would think it would feel unsettling or discordant – NOPE!  Just, really interesting!

Jupiter, the Bringer of Jollity

This is one of my favorite pieces in the entire orchestral repertoire, in fact, at our wedding, my husband and I processed to the Hymn that is at the center of the movement. And, while I was Artistic Director at GTCYS, I made an arrangement of the Hymn for all 500 kids to play en masse at Orchestra Hall for the year-end concert.

There are at least five jolly themes spun in glorious ways and offered to every section within the orchestra.  In Roman terms, Jupiter was the leader of all the Gods and represented divine authority and was associated with freedom, exploration and merrymaking. Holst described him perfectly!

Saturn, the Bringer of Old Age

The youthful exuberance of Jupiter is now replaced by the inevitable coming of old age. Holst first describes the approach of life’s last years – worry about being alone, the vanishing of friends, the failing of our earthly bodies, the closing of a familiar chapter. The basses play a very slowly moving theme that seems to suggest defeat. Then, Holst bestows the trombones with a chorale that is the voice of wisdom. There is a sense of acceptance of an ordered hierarchy of nature. The piece ends so beautifully with harps, celeste and high strings bringing things to an apotheosis.

This is such a fascinating piece for a conductor to study. There is one four-note motive that opens the piece. Immediately it is repeated in the tuba at double speed and then repeated again, in the timpani, at quadruple speed. Holst IS the magician because throughout the entire movement that same four-note motive is heard at many speeds and iterations – even played upside down, 12 times in a row, in a flurry of woodwind writing. At the end, there is a sudden collapse of sound as if the magician has made himself disappear. The music is slow and very quiet. But, the motive returns for a couple seconds to remind us of our magician’s dramatic skill.

Neptune, in Roman mythology, is the god of the sea, and the deep blue color of the planet reflects this. Holst subtitles it the Mystic. Astrologers associate the planet with illusion, confusion and deception. No wonder, then, that Holst uses the composition technique of bitonality. There are many chords that are made up of a minor chord playing simultaneously with a major chord (e minor plus G# major, for example). There are no real melodies, just bits and pieces of melodies. At the end a woman’s chorus begins to sing without words. They are the ones who end the piece imperceptibly, suggesting the ongoing universe, far beyond our current ability to explore it.